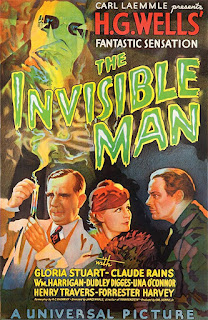 “We'll begin with a reign of terror, a few murders here and there, murders of great men, murders of little men - well, just to show we make no distinction. I might even wreck a train or two...  just these fingers around a signalman's throat, that's all.”
-The Invisible Man

It is a fickle art to create the perfect monster because often the best results go against the conventional wisdom of what is considered scary. Take a look at the Universal Monsters; characters like the Mummy, Frankenstein’s Monster, and the Wolfman were designed to strike fear on site, yet the most terrifying of them all is the character that nobody can actually see. The Invisible Man himself is paranoia personified in all its macabre glory. He is both a ghost and tyrant who exploits his newfound power by violently haunting his victims until they bend to his will. While often overlooked, the paranoia and violence created by the Invisible Man not only makes him the most terrifying Universal Monster, but easily the most relevant.
The spectacular design of the creature alone makes the Invisible Man a true contender for one of the best monsters ever. Sure, his introduction is a tad absurd with him barging into an inn with his bizarre outfit of a hat, trench coat, bandages and glasses covering his face—like a mummified Humphrey Bogart—but once he unpeels that disguise, that is when the great horrors begin. After stripping himself naked, since clothes reveal his presence, he goes on a rampage, strangling policemen, knocking over baby carriages and throwing away on old man’s hat. His presence is only known through sadistic cackling. This introduction shows she Invisible Man personifying the classically cinematic yet human fear of the unknown. It is that fear of being watched, but with no way of knowing of who or where they are hiding. This fear is what fuels the monsters in Cat People, The Haunting, and Halloween, and through the Invisible Man  the audience sees this fear personified and its troubling potential.
A thing to the film reminds the viewer about the Invisible Man is that he is just a man named Dr. Griffin. Granted, his a scientist smart enough to discover an invisibility serum, but a plain fragile man, nonetheless. There is no curse bending his will or animalistic nature to force his villainy. He certainly does not have super strength. He is evil in that by understanding the potential of his serum, he takes the advantage of his power trying to control those through fear. He dabbles in tyranny by haunting around villages in order to steal, assault, and strangle victims, leaving no evidence beyond the sound of sick laughter. The character’s antics even make him a celebrity of sorts as the newspaper headlines features every single one of is horrifying crimes. It is implied the that serum drove him mad, but he is far too lucid of a character to considered mad in a contemporary sense. If anything, he is like a bitter drunk, whose inhibitions have melted away, and now he is able to vent his bitter hatred for humanity without fear of accountability, which is rathe apt. How can one be held responsible for their actions if they cannot be seen or caught?
Dr. Griffin not only exploits his abilities in order to spite for humanity, but also for his own pleasure. His laughter gives him away, but this is cemented with a line of assurance he gives to his lover Fiona, “Don't worry, the whole world's my hiding place. I can stand there amongst them in the day or night and laugh at them.” For lack of a better word, Griffin is a troll. He has a contempt for humanity that is only matched by his comical thirst for destruction, all fueled by the fact that he has no fear of being caught. This is a man who derails a train just to see if he can get away with it, and laughs. There is no real significant difference between a monster with an invisibility serum and one with a cluster of fake social media accounts. They can attract unwanted attention, but as long as no one can actually find them, they feel no shame in hurting innocent people.
The Invisible Man is a terrifying tale that shows what happens when angry men are given the power to hurt without fear of accountability. The man himself is a villain of pure contempt who desires to control people through fear and destruction, which is a trait that is more common in humanity than one might admit. If there is any assurance to be had, it is in the ending, as the Invisible Man dies the serum’s effect fades and slowly reveals the unremarkable flesh (well, as unremarkable as a young Claude Rains can be) of Dr. Griffin. He is just an ordinary man with a name to match, anyone with a name can be held accountable. 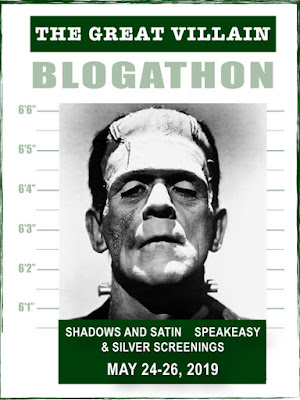 This blog post is part of the one of my favorite Blogathons, The Great Villains Blogathon! Check out the host sites at Speakeasy, Shadows and Satin, and Silver Screenings for more devilish content!

Posted by lonely critic at 9:32 PM