Bette Davis and The Man Who Came to Dinner 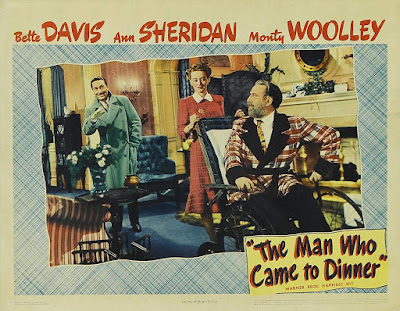 It is Bette Davis’ birthday weekend, so let’s talk about the legend. She is an actor with such a presence that she essentially willed the Academy Awards into contemplating the idea of write-in votes with her lead performance in Of Human Bondage (1934). Then when that campaign fell through, she was given the Oscar next year for Dangerous. She is the definitive dramatic Hollywood star, a consummate professional who always gives it all, leaving a legacy of resplendent dramas like Little Foxes, Dark Victory, and All About Eve. So what happens when she tries to do a comedy? The Man Who Came to Dinner is a simple, bordering on simplistic, 1942 comedy where Davis plays the snarky straight-woman to Monty Woolley as he chews the scenery out of existence. The film is not exactly Chaplin, let alone Shakespeare, but nevertheless Bette Davis shines in a rare yet refreshing comedic mode.
Based on the play of the same name, The Man Who Came to Dinner is about Sheridan Whiteside (Monty Woolley), an infamously verbose and sassy radio personality who decides to annoy the lives of a dull bourgeois family after breaking his leg on their stairs. So he goes on bedrest in their home, inviting every pet, celebrity and quirky friend over, just to piss off the stiffs. His most vital colleague is his assistant Maggie (Bette Davis), a spinster with a high tolerance for Whiteside’s nonsense. In a broad way, Maggie is very much like Hildy Johnson from His Girl Friday—a “seen-it-all” career woman that hides her vulnerability with sardonic wit. Maggie is not a machine gunner of epic one-liners that made Hildy such a legend, but a sniper that strikes with a murderous barb when the moment is right. A particular brutal moment comes when Maggie—frustrated with Whiteside’s selfishness—calls him an egomaniac who “would just as soon see his mother burning at the stake… if that was the only way he had of lighting a cigarette” right to his face. That is a cold line, all delivered in a tired yet cathartic purge, as if years of dealing with his crap is venting through her soul. Davis may not have the all the best lines here, but when she does, she more than makes up for it with her subtle yet intense performance.
Bette Davis plays Maggie less as a straight woman but as the deadpan eye of a hurricane that crashed into a madhouse. Whenever anything absurd happens she responds with a tough and sardonic poise that makes her seem invulnerable to the nonsense. That is until someone gets under her skin, then her eyes just beam with a murderous contempt. This is particularly true when Ann Sheridan shows up to steal away her love interest; at that moment, Davis looks like she is about to grab the nearest knife and pounce. Moments like this shows a key advantage that a dramatist has when thrown into a comedy, by simply giving it her genuine all during a moment of absurdity, it naturally pushes the moment over the top, in the best way. It is one thing for an actor to just mug angrily, but to play a character mad enough for the audience to believe it, that makes for some spicy comic tension, and Davis can do it with a glance. It is the kind of acting that can provide all the momentum for a film, which The Man Who Came to Dinner often needs.
If there is a fault that cannot be ignored about The Man Who Came to Dinner, it is that this is very much a stage adaptation and not much else. Outside of stock footage of an octopus, this movie takes next to no advantage of the camera and editing room at all. Almost every scene is composed with flat wide shots that are enough establish almost every character in a scene and the blocking of the actors is just as undynamic. At least it has a funny screenplay and is filled with funny actors like Monty Woolley, Billie Burke, Jimmy Durante and so many more (seriously, cast list is a who’s who of early Hollywood character actor) to play off of each other. For all its faults, the film is still a great comic acting showcase.
The Man Who Came to Dinner is not particularly revelatory comedy on its own, filmmakers like Ernst Lubitsch and Leo McCarey played with similar ideas and archetypes with more panache. What is revelatory is Bette Davis’ potential as a comic actor. In this film, she utilizes every trait that defines her as a great dramatic actor and precisely twists them to fit a comedic mold. Her trademark sultry stare makes her both a natural deadpan and allows her to convey an intensely sardonic glance that is priceless. Plus, when given to the chance to spit out a good insult or one-liner, she does so with the intent to kill. If nothing else, The Man Who Came to Dinner is a minor yet vital film in Bette Davis’ catalogue, as it allowed her to expand her craft in a way that only a comedy could. In the films she made after this, like Now Voyager, All About Eve and What Ever Happened to Baby Jane? show Davis acting with a sharper sense of wit and precision with her characters and dialogue that defined her style. A far cry from the sheer rawness she had in Of Human Bondage. Bette Davis has always been great, but The Man Who Came to Dinner represents her transition from the great melodramatic actor to a Hollywood legend. 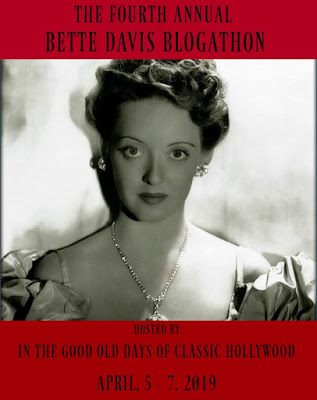 Posted by lonely critic at 9:17 AM