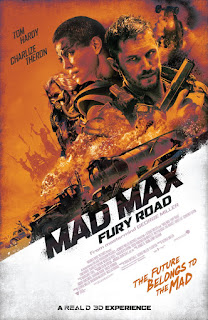 What an odd time to be alive when the third sequel to an Australian post-apocalyptic action film series about an ex-cop named Max Rockatansky is the most talked about film of the summer. Thirty years since Mad Max: Beyond Thunderdome, Max is back, and looking more like a young Tom Hardy than an old Mel Gibson, continuity has never been this series’ strength. In this adventure, Max is swept in the epic chase for Imperator Furiosa (played by Charlize Theron) as she rescues sex slaves from clutches of the evil tyrant Immortan Joe and his Warboys. This film should have gone the way of Indiana Jones and the Kingdom of the Crystal Skull but it exceeds the highest standards of action filmmaking in brilliant and defiant fashion. Not only is Mad Max: Fury Road a loud, bone crushing and liberating action film, the action itself is used to convey themes of gender politics with a profound yet unpretentious touch.
Almost every single action scene is done with practical effects, which may not sound like much until one actually witnesses the level of craft and danger produced onscreen. Not only is a there a big rig with a giant speaker wall and flame-throwing heavy metal guitarist strapped on top of it, but this machine is real and is put into the fray. What could have been an epic simple gag later becomes a set piece for brilliant action. The stunts pulled in this film are baffling; forget the gunplay or the fight choreography, the real treat here is watching these people jump around, crash, and burn these cars with insane glee. Yes the film is a relentless two hour-long car chase but it is a chase of overwhelming depth, imagination, and precision.
An unexpected but welcome twist to this series is that Furiosa, not Max, is the true main character of this story. First of all, Charlize Theron’s acting in this film is arguably her best work here since her work on Monster. She plays Furiosa as a determined, meaty, and sharp soldier but with an unusual sense of purpose. During one of the few quiet moments in the film Max asks why Furiosa is rescuing the slave girls and she simply says “redemption.” It sounds like silly action movie shtick but this is works because her motivation does not feel overtly maternal, which is rare amongst heroines. The audience never fully understands why she decides to become the hero, but those missing pieces ultimately do not matter, it is her actions that prove her heroism. This not like Ripley trying to save a little girl in Aliens or “The Bride” avenging her husband and child in Kill Bill, Furiosa’s redemption is universal. Some people might be upset that Max is just a “supporting character” yet it is refreshing to see an existential female hero for a change.
A lot of critics have discussed at length about the film’s themes of patriarchal tyranny and feminism but what makes this film work so beautifully is that these themes are developed through the visuals.  In one action scene, Max tries to snipe the searchlight off of a scout car at night, after failing twice he gives the rifle to Furiosa who then shoots down the light. This is a defining moment of the film because the trade is done quickly and amicably. Max knows Furiosa is a better shot and he is not going to debate this fact. A lesser filmmaker would have added some cliché “battle of the sexes” banter but director George Miller does not have time for that bullshit in his action film. Everything about the struggle of Furiosa, the sex slaves and Max are told through a camera shot, a lighting trick, or even a simple gesture, and it makes them intriguing characters. Furthermore the filmmaking reveals this setting to be a fast, brutal and unfair world, yet by the end there is sense that it is fixable if one is brave enough to face it. Watching this film is a testament to how much can be said without saying anything at all.
Mad Max: Fury Road is easily the best action film of the last ten years, which still sounds nuts on paper.  This film should have been a cynical cash grab, but then again who can truly predict a loose cannon like Mad Max? The film can melt faces faster than a Judas Priest record and somehow it is easier to comprehend than the most blockbusters of recent memory. The use imaginative practical effects create a rare sense of fear, texture and prestige to the violence created onscreen. The action alone would have made it a highlight of this year but the filmmakers made a conscious decision to examine themes of tyranny and feminism through the action, and it worked wonderfully. Even when smarter action movies like The Avengers, District 9 and The Dark Knight attempt to delve into greater themes they trap themselves in a ponderous state of reasoning, as if the filmmakers feel hindered by their genre or the themes. Mad Max: Fury Road does not have this problem because George Miller and crew were secure enough to run with their themes from the start. This is an audacious passionate action film that was refined by personal insight and that alone is beautiful.
(Mad Max: Fury Road is still in theaters... just realized that this is my first theater review, talk about late. Anyway, check it out on Blu-ray when it is released though, it's totally worth it.)

Posted by lonely critic at 6:15 PM