The Dark Tones in Double Indemnity 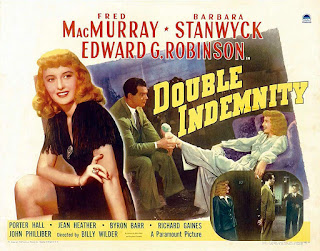 Tone is the concept of brightening and darkening light to create depth and mood within the frame. Billy Wilder’s Double Indemnity is a key example of a film that creates mood through the means of shadows and light. Double Indemnity is a film noir about an insurance salesman named Walter Neff who is smitten by the sultry and conniving Phyllis Dietrichson who entices him to murder her husband for his insurance money, which leads to Walter’s downfall. Film noir is a fairly abstract genre usually involving good people doing bad things and bad people doing worse, but one thing that defines film noirs are their dark and hazy tone. Double Indemnity is arguably the most definitive example of the film noir tone. The film is shot in affinitive black-and-white, which is great for creating distinctive shadows and silhouettes, giving the film a mysterious and bleak atmosphere. Tonally the film has subtle amounts of contrast yet Billy Wilder’s cinematographer John F. Seitz effectively uses it through incident controlled lighting to create an intensely Californian setting. Tone in Double Indemnity is such a significant aspect of the film that it becomes the defining style of the film.
Incident controlled lighting is a style of illuminating a set by using artificial lights to create strong shadows; unlike reflective control, which revolves around art direction. Double Indemnity is a great example of the incident control as method of creating a realistic setting.  For example, after Walter Neff first meets the Mrs. Dietrichson, he walks into her living room and narrates about the venetian blinds blocking the sunlight, which are casting a striped shadow in the set (see Figure 1). The film takes place in a sunny Los Angeles and this moment provides a sense of place, one can imagine the heat seeping through the windows. Furthermore this can be seen as a metaphor of the salesman is being blinded by the femme fatale’s beauty. It is a beautiful shot that brings a sense of literal and figurative heat into the film.

To have coincidence in tone the lighting has to be set to reveal the subject. If one can see the subject clearly then the tone is coincidental. This can look uninteresting onscreen because it is essentially the default tone for less mysterious genre films but it is still useful when properly manipulated. Double Indemnity stretches the possibilities of this technique by adjusting the exposure of the camera. This is used to great effect to portray the physique and intentions of Mrs. Dietrichson. Her first appearance reveals her wearing only a towel, seemingly aloof but not vulnerable. She is lit brightly in order to give her a sensual aura that makes it clear why the salesman would kill for her in the first place. As the movie progresses though, the she is depicted in a darker tone by shooting the film stock with less exposure (see Figure 2). The increasingly dark affinity to the lighting of this femme fatale is a subtle reminder from Billy Wilder of her sinister nature.  In a realistic setting she could easily hide her monstrous self but the dark lighting makes her intentions clear.

An overlooked aspect of Double Indemnity is its art direction and how it also controls the tone of the story. This is a form of reflective control that hard to notice because the shadow filled cinematography of John F. Seitz can distract from this element; nevertheless the element is there and it is effective. One only has to look at the suits that Edward G. Robinson’s character, Barton Keyes, wears throughout the film. Barton Keyes is Walter Neff boss as well as their company’s main investigator for insurance fraud. During the first and second act, Barton is shown mostly wearing a disheveled white collared shirt and a pale colored vest, which makes him look optimistic and oafish. This is emphasized by how Walter always helps Barton with lighting a match; it shows how much they respect each other, as well as how Walter is always thinking ahead of Barton. Then in the end, Barton finally catches Walter confessing to his crimes while wearing a pitch-black suit (see Figure 3). The suit can represent many things, whether it is Barton mourning his friend’s fall from grace or a cloak of cynicism, however the way Barton move towards Walter turn him into a herald of Walter’s doom. This sudden change in costume is only pushed when a wounded Walter slumps to the ground and Barton looms over him like a reaper ready to take his soul and lights his cigarette.  It is a tragically precise way for the film to end.

With Double Indemnity, director Billy Wilder employed tone to such a strong degree that he arguably defined the sleazy theatrical style of film noir.  Billy Wilder’s use of affinitive tones in the film is surprisingly flexible by having the tone get gradually darker in order to cinematically portray the bleakness of the plot. The lighting and shadows of the film create an atmosphere that fits natural to the setting while still feeling stylish and sensual. The art direction of the film is simple enough to not clash with stylized lighting while still effective in creating drama in an already dark film. Film noir is an unusual genre in that its mainly defined by visual style than by plot devices. Double Indemnity and films like it are formed through their aesthetic, which is what makes them so brilliant.