Dope and A Girl Walks Home Alone at Night

Hello blog, it's been a while. I would say that college kept me distracted but honestly it was because I stretched myself thin. Lately a slew of fantastic and interesting films popped up from everywhere and all I could think was, where do I begin? Dope was great, Inside Out was amazing, Lava was lame, Jurassic World has... issues, and I finally saw Boyhood, which was great but the discussions I had about it were even better. I made the mistake of writing about all of them at once, leaving with me half finished stuff and nothing to post, but now I have something, two things. I figure write about one film in theaters plus one film that is streaming would make a sort balance. It might be unnecessary in the long run but feels right for now. So here are two films that are from totally different genres but they share the distinction of being shot on location in California. It is not much but it is amusing to see two filmmakers find inspiration for two very unique worlds within this state. 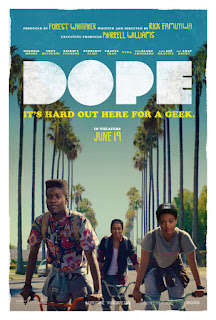 Since when did the 1990s become the new 1980s? If one asked the lead actors of Dope, Shameik Moore, Kierset Clemons and Ton Revolori, it never left as far as they are concerned. Dope is an indie drama-comedy about three 90’s pop culture loving high school nerds, Malcolm, Diggy and Jib, as they survive living in the gang-ridden Inglewood, California. We see them play the Super Nintendo, talk about when the Golden Age of Hip-hop began, start a punk band in their defunct high school music room, find romance, yet the film forgoes of the cloying tone of teen drama.
Their stories reveal an idiosyncratic notion about the difficulties of being an outcast within an outcast society. These are nerdy kids who were never interested in the bullshit gangster lifestyle, yet have no real choice but to live around it because society expects nothing more or less. The film jokes that good grades are a thing only white people like, yet all three have good grades.  It creates a fascinating context about how systemic hatred can cut so deep that it even can make fellow men turn on each other and the comedy makes its very palatable.
Honestly the main trio is so fun that the film could easily work vignettes about them and their neighborhood. However, Malcolm somehow stumbles into the Molly trade, which is funny but also feels a bit forced.  Aside from a genuinely clever method involving the Internet to get out of the game, the story itself is not much compared to characters and setting. Thankfully by presenting it as a comedy of errors that makes it transcends Dope from being just a Superfly knockoff.  It also helps that Shameik Moore, the actor who plays Malcolm, is has the comic charisma that makes it all seem believable. His trip into the Molly trade may be a mistake but it was one that he could fix, which is a nice note of the film.
Overall, Dope is pretty awesome. The film is structured a little clumsily but it is a darkly funny character piece that has a cautiously optimistic look at race and lower class living, which makes it worth seeing on its own. It also features cast of great comic actors, especially from the three leads who ought to be stars before the decade ends.  Curious to see if this film will stand the test of time, in an era of throwback acts, Dope could just fade away, but with its strong themes and wit it might stay relevant for a very long time.

(Dope is still in some theaters though it is phasing out, odds are likely you will have to wait for it to stream or to be on disc.) 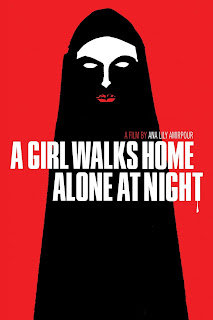 In the seedy town of Bad City, the people who rule the night are not the junkies, the pimps, prostitutes, or even the gangsters, but an unassuming vampire woman that haunts the streets. Touted as the “first Iranian vampire western” ever made A Girl Walks Home Alone at Night sounds like some hot hipster junk food but it stands out with a great sense of style and cool energy. As her directorial feature debut, Ana Lily Amirpour makes a striking impression with this sensual chiller.
One thing to clarify is that while it is an Iranian production, the film itself is shot on location in Taft, California yet it is not set in California or Iran. In a sense the film takes place in a hyper stylized movie world. This is emphasized by the film’s stark black and white photography, which makes gives it the intensity of a noir, horror and western but also the icy vibe a French New Wave flick. The shadows are deliciously dense, as expected, yet it truly stands when the anonymous vampire girl moves onscreen, she wears this black cloak that gives her a ghastly presence, even in funny moments like when she glides on a skateboard, it flutters like a bat. Simultaneously she has this ethereal allure to her, which is partially due to actress Sheila Vand’s strong presence, but also in the way that camera frames her pale face just pop onscreen radiantly like a demented Mae West. The camerawork here not only creates a horror landscape it helps in portraying one of the truest vampires in years.
A Girl Walks Home Alone at Night has style but there is a sense of fatigue to the film that may put people off from it. The film is a slow burner but this pace works because it matches with the film’s running theme of spontaneous pleasure and the weariness that comes afterwards. Characters try to find satisfaction through things like pop music, sex, loud parties, and drugs that feel great at first but always leave them exhausted.  This conflicts through the ambiguous nature of the vampire who could easily be a demonic trickster or a warped kind of savior.
Slow or fast, A Girl Walks Home Alone at Night is a dark corner worth exploring. Ana Lily Amirpour is a powerhouse director who brings a cool and passionate sense of craft of someone like Truffaut… if he ever made a horror film. For a film touted as “first Iranian vampire western” it not only transcends that gimmick but also leaves mainstream American horror in the dust. This film is one of the more original, sexy, and remarkable vampire films in recent memory.

A Girl Walks Home Alone at Night is streaming on Netflix, for rent on Amazon as well as on disc.

So for anyone who stumbles upon this, check these out and if you have any questions just ask.
Posted by lonely critic at 7:25 PM