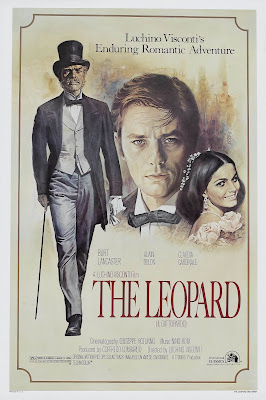 Technicolor, a wonderfully named film colorization process that defined early to mid 20th century Hollywood filmmaking with regal and candy-colored movies like Singin’ in The Rain, The Wizard of Oz, and The Red Shoes. This process is not known for creating realism onscreen, but it allowed filmmakers to find a painterly beauty within their films, Luchino Visconti’s The Leopard is among such films. The Leopard is an epic Italian melodrama that takes place in 1860—late into Garibaldi’s campaign in the Risorgimento—as the aging Don Fabrizo Corbera, Prince of Salina, watches in quiet despair as the aristocracy loses in relevance in the country’s ever changing political climate. Like the Spaghetti Westerns, The Leopard is a European film made with a Hollywood style for an international market in mind; featuring stars like French actor Alain Delon, Italian actress Claudia Cardinale, and American actor Burt Lancaster as the Prince. With Visconti’s fondness for flair and neo-realism, he perceived an empathic vision of the Prince as he struggles to find relevance in his homeland. Through the use of vivid and desolate colors Visconti elegantly reveals the weariness, nostalgia and passion of this time period to the screen.
The color scheme in The Leopard is not as flamboyant as one might expect from an epic. Compared to film like Gone with The Wind or Ben-Hur, The Leopard can look outright muted, but the color is affective in how it grounds the setting of a dying era. Notably, the outdoor sequences are dominated by the beige colors of dead Sicilian grass and clay buildings ravaged during the Risorgimento. These colors compliment’s the film’s theme of archaic perspective of the aristocracy and their fading relevance.  This comes into full force when the Prince and his family retreats to their summer palace in Donnafugata. They reach their destination during a dust storm, and attend Catholic mass covered in sandy gray dust, dressed in black. They sit still and listen to the organ play, looking like statues from forgotten ruins as the camera slowly pans to each family member. It is a quiet and nostalgic elegy to a more glamorous time.

The Prince is a fascinating character in terms of presence and substance, much of which is portrayed through Burt Lancaster’s performance. With help from silver hair, moustache, and a detached demeanor, Lancaster simply disappears into the role as the Prince. Through much of the film, the Prince is more of a witness than an actual instigator to the changes of Italy’s political climate. In fact, when a village celebrates over an election shoddily rigged by the corrupt mayor Sedara, all that the Prince can do is smoke and giggle the absurdity of it all, not even fireworks could impress him. Lancaster embodies the bleak psyche of the Prince, portraying the character with cold detachment, but also profound sense of self-awareness and grace.
The film brightens up a bit with the introduction of Angelica (Claudia Cardinale), the daughter of Sedara, who charms Tancredi (Alain Delon), the Prince’s beloved nephew and heir. There is a morbid quality to their relationship, she was born solely for purpose of being married off—and indirectly getting Sedara accepted—into the aristocracy. Tancredi pays no mind to this and it is easy to understand his perspective. Every scene with Angelica emphasizes her beauty, charm but also her status as an outsider.  In a sequence where Tancredi and Angelica tour a dull filthy abandoned wing of the palace, Tancredi wears a matching brown suit whilst Angelica wears a bright pink dress. She is in contrast with everything and everyone in the palace. Angelica knows this, and some of her future in-laws callously accept her, but she remains resolute, which Claudia Cardinale portrays with effortless smolder. If there is an actor that shines like Burt Lancaster, it is Cardinale.

The sequence that defines The Leopard is the ceremonial ball that is the focus of the final hour of the film. This party takes place in golden ballroom, filled with hundreds of people dancing, dining and all dressed in some of the finest clothes ever shown onscreen.  It is a glamorous celebration of Tancredi and Angelica’s union but the dramatic core is the Prince’s growing detachment to the jubilance, knowing that his era is coming to its metaphorical end. There is one moment of levity for the Prince when Angelica offer him waltz, which does make him feel young again.  The dance is composed with graceful subtly—the master shot just far enough away to see their legs move in rhythm with some softly lit close-up intercut to sell it—as these two characters from different generations share this one beautiful moment of escape.  Powers may shift and lives may be lost when that, but at this moment, dancing is all that matters. Like the rest of the film, the ball sequence is both beautiful and difficult to process as it fills the viewer with contradicting feelings on the aristocracy, while critical of their decadence and glamour, it is impossible to not be moved. The many dances, the regal decorum and all the colorful costumes have an emotional connection to them, which is all the more palpable knowing that it will vanish within their lifetimes.
When thinking about the great early Technicolor films—The Red Shoes, Ben-Hur, et cetera—they are lauded for pronounced and wonderfully bombastic use of color; however, The Leopard reveals their beauty through a subtler yet no less profound manner by using colors as signifiers. They reveal the film as a complex historical allegory as well as a heart-achingly romantic drama featuring Burt Lancaster and Claudia Cardinale performing at their very best. The Leopard is a unique epic where the quiet and delicate moments standout just as strong, if not more so, than any chariot race or dreamy ballet routine of the Technicolor film that preceded it. 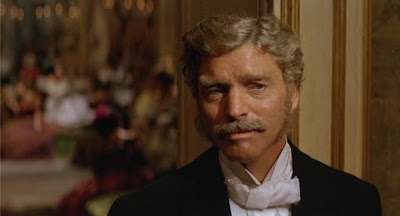 (The Leopard is available on Blu-ray and DVD via the Criterion Collection in a set that includes the 185 minute long Italian cut, as well as an American cut that is only 160 minutes long and dubbed in English. This review is based on the Italian version.) 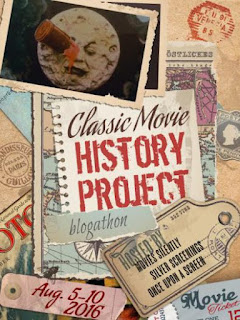 This review is also part of the Classic Movie History Project, a blogathon celebrating the best, worst and most unusual aspects of cinematic history. The event is hosted Movies Silently, Silver Screenings and Once Upon a Screen. Check out their pages for more stuff about Technicolor, Silent movies, Box office hits, duds, and more! A special thank you to the hosts for organizing this project and encouraging the uninitiated into viewing classic movies.
Posted by lonely critic at 2:34 PM