Witnessing Immortan Joe and his War Boys on the Fury Road

(Spoiler Warning: I don't usually state this since I try to at least dance around major plot points, but this was a case where that was not possible, my bad. For maximum reading pleasure, go see Mad Max: Fury Road first, let it scorch your mind, and then read this.)

Mad Max: Fury Road, there is too much to love about this movie. The film is an instant action genre classic that plunges beautifully into themes of feminism and environmentalism with profound depth just through visual storytelling alone. It also provides one of most remarkable villains in recent memory with Immortan Joe. He is an absolutely metal antagonist, but everything about his actions and aesthetics reveals a villain whose most powerful trait is not his strength—in fact outside of driving his car he does nothing strenuous—but his ability to manipulate with his voice and rhetoric. Even his wily, chalked covered, V8 engine worshipping War Boys are more than just delicious cannon fodder. In fact, the film subtly reveals a tragically exploitative relationship between these two antagonistic entities, fueled by the hyper-masculine tyranny of Immortan Joe.
The visual design of Immortan Joe is fascinating because it is portrays man who preserves himself through intimidation. At the beginning when he is getting dressed, it is established that he is very weak, old, and needs constant care to live. He covers his bloated, tumor riddled body with a suit of sculpted glass armor donned with military badges, and wears a viciously toothy mask that doubles as a breathing apparatus. The mask is the most striking piece of his costume for it visually represents his greatest tool as a tyrant, which is his harsh commanding voice. He controls his home, The Citadel, by spouting rhetoric to convince those weak enough to believe him. Everything he says, whether it is that women are nothing more than breeders, men are warriors destined for Valhalla, or that water is Aqua-cola, is just propaganda meant to control the populace for his own gain, and it works. Such rhetoric is easy to fall for when water is a precious commodity and life is so short and painful, but is still horrifying in it effectiveness.
It is very appropriate that the actor who plays Immortan Joe is Hugh Keays-Bryne, who famously played Toecutter in the original Mad Max back in 1979. Toecutter is a villainous gang leader who spends much of the film manipulating a young thug named Johnny into becoming his protégé. Toecutter is a brute, but he is a compelling one who can convince young thugs into believing in his cause. Joe functions similarly to Toecutter but in a much grander scale. Immortan Joe has an entire army of thuggish soldiers known as the War Boys who worship Joe and the V8 engine because they believe that by dying for his cause they will ride to Valhalla. Their devotion comes from the fact that the War Boys are terminally ill, some with cancerous tumors poking through their bodies. They enforce Joe’s tyranny with through violent means, ranging from suicidal attacks and brand people as slaves. One group even devotes themselves to Joe by playing drums and a flaming-throwing electric guitar on a rigged-up dump truck, which seems like a waste of resources but such waste means nothing to a leader hoards his goods. It also helps to consider that to Immortan Joe the War Boys are just a means to an end, just like Johnny was to Toecutter.
What makes the War Boys so tragic is that they are essentially an army of dying, sickly men raised into believing that Immortan Joe will give them a higher purpose, but they are ultimately just his disposable tools. One beautiful aspect of the story is how the audience is provided a War Boy’s perspective through Nux. This is a War Boy who dreams to die in front of Immortan Joe, but throughout the film we see him come into conflict with the ways of Joe and the heroic revolt of Imperator Furiosa. When Joe abandons Nux after proving himself “MEDIOCRE!” He confesses to Capable—the redheaded bride who escaped Joe’s prison—that Joe’s gospel gave him purpose, and even made him forget about the tumors strangling his windpipe. He believe that dying was his destiny but then she suggests that maybe it is his “manifest destiny not to.” This moment is powerful because it shows Nux being given a new choice in life that Joe would never provide. For Joe, it did not matter that women were being reduced to slaves or those who were weak were being starved out, as long as he can convince the War Boys that their actions had only one “true purpose,” he sits in his throne without fear. At least until Imperator Furiosa and the former brides of Joe kicks him off of it.
Immortan Joe is a unique villain in that behind the surface of his so classic heavy metal get-up is one of the most diabolical and thorough tyrants in the history of film. Through his words and presentation alone he exploits an entire populace to become his personal slaves, breeders and army. So it makes for a great and symbolic catharsis that Furiosa kills Joe by ripping off his mask from his mouth, his greatest assets. The War Boys in spite of their viciousness were tragic souls who were molded by Joe from the same people that he had oppressed. The ones that willingly died for Immortan Joe were hopeless, but as the character arc of Nux reveals that even they could be redeemed. Making it all the more hopeful that the youngest generation of War Boys can be taught new lessons of empathy by Imperator Furiosa and the recently widowed wives of Joe. Maybe they can actually live again.


So those are my thoughts on Immortan Joe and the War Boys. This post is part of The Great Villain Blogathon, which is hosted by Speakeasy, Silver Screenings and Shadows and Satin. Check out their sites for more blogs and essays about other great villains that haunted the theaters screens. Or follow #Villains2016 on social media sites like Twitter and Facebook. May you read them all shiny and chrome!!! 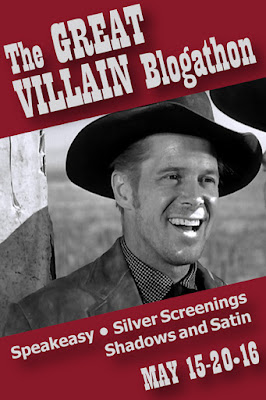 Posted by lonely critic at 9:09 PM