A couple days after writing about The Invisible Man, I was given a request by @WalrusNo (via letterboxd) to watch and write about Paul Verhoeven’s Hollow Man. So I did… it is not good, but in a way that is kind of compelling. First of all, thank you @WalrusNo for the suggestion, and sorry for taking such a long time to write this sloppy piece (though maybe it fits nature of the film, in hindsight), hopefully it will suffice, regardless. Anyway... 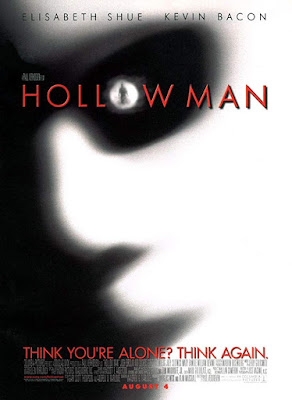 Verhoeven is no stranger to exploitation and cynicism, he is known for smartly using these elements in the form of satire and cutting subtext. His English 80s-90s output—like Robocop, Starship Troopers, Total Recall and Showgirls—are cynical and crass stabs in the dark, skewering the likes late-stage capitalism, fascism, and the media, which only rips further on repeat viewings. Yes, even Showgirls. Imagine the looney lovechild between Douglas Sirk and John Carpenter, that is Verhoeven. At times they are too crass for their own good but at least they are clever and made with conviction. Hollow Man is a showcase of Verhoeven losing all conviction. Anytime a compelling idea is hinted on the screen, it actively veers towards cheap slasher movie antics. The wit is gone and only the crass exploitation remains.
To say Hollow Man is a fairly vague adaptation of The Invisible Man would be generous. The creepy original Dr. Griffin is now Dr. Caine here (Kevin Bacon giving it his sleazy all), a military doctor who goes mad from an invisibility of his design. Now, taking liberties is par for the course with adaptations, but this film forgoes the paranoid themes of terrorism in favor of boring, economical slasher horror shtick. Rather than witness the Invisible Man wreak havoc across the nation, we see a sexually frustrated man in a latex mask wreak havoc in a locked down cheap knock-off Jurassic Park laboratory. Much more attention was paid towards special effects, namely the gruesome symptoms of the serum, which slowly makes the skin, muscles, and finally bones vanish from sight. This special effect has not aged well however, looking more like a video game character failing to render properly than anything real, or scary. What a load. As the cast pantomimes their death in progressively silly ways, one wonders what the point of even associating the film with H.G Wells when it clearly aspires for William Castle flick.
The film makes an awkward attempt to modernize the madness of the classic character by focusing concept towards dark sexual themes, which is simply unpleasant. Once Dr. Caine becomes invisible, his mind bolts him into becoming a harasser and later a rapist murderer, which provokes ideas about sexual violence and toxic masculinity that is still relevant to this day, though it is handled as tactfully as Brian DePalma at his worst. The film glimpses Dr. Caine’s worst actions through these lurid POV shots, a move evoking Michael Myers’ creepy introduction in Halloween (1978). Though rather than creating that same creeping dread, they come off here as tired and cringy. These shots put the audience in Caine’s perspective, but the film never skewers his perspective in a meaningful way. It just plays like a crass attempt at cheap sexy flair, which this does not need. This is what exploitation looks like, a film that superficially provokes sensitive subject matter for the sake of cheap thrills.
Even if one gave the benefit of a doubt that this was a well-intended attempt at tackling such serious material, all the lurid POV shots and displays on toxic masculinity all goes to hell in a handbasket with a third act that looks like every Sy-Fy slasher film. Any sense of thematic arc is rendered into a trash fire. The most egregious example is the arc of Kim Dickens’ character, Sarah Kennedy, a colleague who defines herself as a brashly moral good by being constantly at odds with Dr. Caine’s unethical practices. She is also the first one harassed, which occurs in a tone-deaf scene that plays like Russ Meyer attempting fuse Hitchcock with burlesque. One would at least expect some kind of catharsis, she is certainly compelling enough to deserve it, but she merely succumbs to a neck snap. No catharsis, just another body to fill out Hollow Man. In hindsight, it should not be surprising, in a film filled with cynical cheap shots, what is one more worth?
Cheap, it is the one word that haunts me in this review. The word is so simplistic, I keep thinking the word is four letters long, but it fits Hollow Man like a vinyl glove. With every direction Verhoeven could have taken, he took the cheapest one, undermining his strengths and revealing his worst traits. His films are cynical, but often in the service of larger meaning. Cynical, self-interested characters fascinate Verhoeven to the point where he can provide vivid clarity of their worldview, whilst gunning them down. With Hollow Man he did not so much misfire, but never pulled the trigger. Hollow Man is an empty-headed mess of that fails to expand upon the story of The Invisible Man, let alone adapt, and a failure for Verhoeven to say anything compelling at all.  Sometimes cheap cynical exploitation is, unfortunately, exactly that, which even Verhoeven realized in hindsight. In an interview for The Hollywood Reporter, he laments “it made money and this and that, but it really is not me anymore… there might have been 20 directors in Hollywood who could have done that” (Zakarin, 2013). As awful as Hollow Man may be, one has to respect Verhoeven for admitting his failures. It is rare even now for an auteur to admit a mistake, rather than complain about PC culture or justify dumb choices through obscure Hollywood trivia. Perhaps Verhoeven learned from failure, his 2016 film Elle tackles similar subject matter and has great reviews; though, having not seen it, I can only speculate. Nevertheless, tackling difficult themes provocatively is an art form in of itself that requires a smart, respectful, committed approach and even the greats can fail. Admitting to failure—more than box office returns or Oscars—is the one thing that separates the greats from the pretenders.