So as of right now I am working on a rough draft for my top ten of 2015, which will hopefully be published before the Oscar awards in 2017. Orlando is not a very film centric town, which makes it difficult to find many of the prestigious films before awards season. Even then, I am lucky to ever find certain foreign and independent films because distribution the demand for such films here are null. Ultimately in order for me to write a top ten with confidence, I need the time to watch as much as I can.

Regardless, this has been a robust year for film. In fact were so many distinguished films that to leave one out seemed almost sacrilege.  So at the very the least, it seemed right to honor the best films that will not reach my personal list and hopefully explain why they are not on the shortlist.  It was either that or I lament about the Oscars, which no one wants to here. Now lets talk movies.

Ex Machina
It has been a good year for science fiction. This year was loaded with mad scientists and robots, but the most fascinating ones are found in the indie sci-fi drama Ex Machina. The story is about a programmer (played by Domhall Gleeson) who is invited to the home of his eccentric genius of a boss (Oscar Isaac) to study and determine whether his latest creation, an uncannily realistic android named Ava (Alicia Vikander), can pass for a human. It starts a bit cold until the story evolves into a demented battle of wits as the android warns the programmer of the exploits of his employer.
The film is an inspired character drama with Gleeson, Isaac and Vikander creating scorching performances all around. Vikander in particular is astounding as Ava the android, she is remarkably sharp playing a character that is either still processing the meaning of humanity or hiding the humanity that she has. Oskar Isaac manages to take the worst traits of many diabolical geniuses, like Frankenstein and Jobs, and still creates a magnetic and uniquely compelling character. This is a cast that will be going places.
The weakness of the film however is that the performances are the only interesting parts. Outside of a few clever uses of CGI, and one impeccable dance sequence, lacks Ex Machina lacks cinematic flair.  The cinematography and editing rarely contribute anything to the story beyond their basic needs. Honestly, it felt like watching Law & Order at times. Not that there is wrong that style, Law & Order is awesome, but it runs a little thin after an hour.
As a sci-fi allegory, Under The Skin and Mad Max: Fury Road delved into similar themes with more engaging complexity. However as an acting showcase for three young actors, it is a treat.
[Amazon Prime, Blu-ray/DVD] 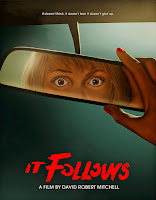 It Follows
Like the title, It Follows is a simple and shockingly effective horror film.  “It” is essentially a venereal disease, which when contracted; a ghastly figure slowly stalks its victim, very slowly. “It” admittedly sounds only slightly less terrifying than syphilis, but the brilliance of It Follows comes from how director David Robert Mitchell composes action around this monster. The film is absolutely Hitchcockian with its use of long takes of “It” stalking a victim unbeknownst of the danger near them.  The film thrives on dread and it is used effectively to tell a simple yet dark tale about sex, death, and pending adulthood. The story ends rather clumsily for my liking, but the fully realized cinematic storytelling here makes this the horror film of the year.
[Amazon, Blu-ray/DVD]

Iris
Who knew that the most painful omission of all would be a simple character-study documentary about an octogenarian trendsetter? Granted when said film turns out to be the last film by Albert Maysles, one of the best film documentarians to have ever lived, one cannot help but feel sentimental. Iris Apfel is one of the funniest and most fascinating characters of 2015. She is a lively and idiosyncratic character whose musings on fashion and life are simply charming.  Maysles’ style as a discreet observer clashes hilariously with Apfel’s magnetic presence when she randomly starts flirting with him in front of her friends. He laughs and barely keeps the camera steady. That little moment reveals what makes Iris so intriguing; it shows the weird complexities of modern beauty and fashion.  Most people will not understand why an old woman is a vibrant trendsetter, but then she says something that will make people laugh or blush and then it all comes clear.  It might just be a minor classic in grand scheme of things but it is nice to see that Albert Maysles’ career ended on a lovely note.
[Netflix] 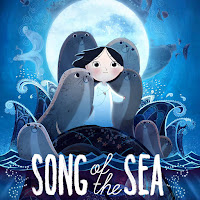 Song of The Sea
Song of The Sea (directed by Tom Moore) is a modern 2-D cartoon fable that is enriched with wonderful and strange Celtic folklore.  This is a film where elderly Faeries, demigods, Selkies, and soul-stealing owls live in quiet harmony with modern Irish bustle.  As chaotic as it sounds, the film is ultimately a somber story about a brother and sister coping with the loss of a loved one that is told with a focused and gentle honesty. The film has the wonder and elegance of a nursery rhyme yet it is when Song of Sea film bursts in a lush spectacle of color that brings tears to the eyes.
Song of the Sea is a beautiful mosaic of a film that feels as timeless as it does modern. Not since Spirited Away has there been an animated film that is so imaginative and masterfully attuned with its style and storytelling. In hindsight, one of the biggest disappointments of the 2015 Academy Awards was not the omission The Lego Movie but the backlash that Song of The Sea faced for taking its place. Song of the Sea was the best animated-film nominated, and if it had a clear American release, it would easily be on the list of the best films of 2015.
[Amazon Prime]

A Girl Walks Home Alone at Night
I have already reviewed this film so I will keep it short.
Like Song of the Sea, it could have been on the list had it been released in 2015, but it seemingly premiered in late 2014 and went to disc and streaming services almost immediately. It is still does not change the fact that it is one of the most unique and entertaining horror films of this decade. Certainly one of the best feature debuts and director Ana Lily Amirpour deserves all the recognition she earns for the film. It simply amazes me that films like this can silently fall into DVD outlets with little fanfare. If nothing else, A Girl Walk Home Alone at Night and Song of The Sea are the unofficial “Direct-to-DVD” films of the year.
[Netflix]

Chir-raq/The Hateful Eight/Bridge of Spies
These are three good films by three great American auteurs that exemplify their best qualities of their works as well as their worst. Spike Lee’s Chi-raq is a furiously funny satire whose cry to end gun violence is honest and true yet the execution is overstuffed with style choices that fit together clumsily. Quentin Tarantino’s The Hateful Eight is a beautifully paranoid and wordy western that features an amazing cast; sadly, the tedious length and structure of the story only shows how the editing skills of the late Sally Menke greatly improved his films. Steven Spielberg’s Bridge of Spies is easily the most entertaining and clever he has made since Catch Me If You Can, but with the exception of Tom Hanks and the intriguing Mark Rylance, none of the cast transcends beyond their need to move the plot forward.
None of these films are bad; if they were, they would not be mentioned at all. In a more conventional year, some or maybe even all of these films would be considered part of the Top 10, but this year was just too weird and good. This was a year where indie flicks shot on camera phones and desktop browsers competed with cine-epics shot on ancient 70MM cameras. This was the year where everyone decided that BDSM was mainstream. There was a new Star Wars and Mad Max film released this year and they were both good.  2015 may have lacked the consistency of 2014 but it was a genuinely innovative year of cinema.
[Chi-raq is available to rent on Amazon. The Hateful Eight and Bridge of Spies are unavailable to rent but can still be found in certain theaters]
Posted by lonely critic at 7:54 PM