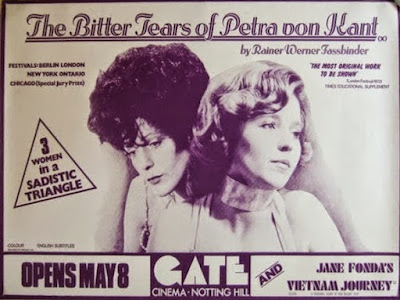 What does a room say about a person? A lot, as far as director Rainer Werner Fassbinder was concerned with his masterpiece The Bitter Tears of Petra Von Kant. This German story is about a fashion designer Petra von Kant and the women in her life as they walk in and out of her bedroom. The film shows her wake up, laugh, cry, and get drunk in her bedroom; but most of all it shows her dominate and exploit these women in order gain any kind satisfaction, only to fatalistic submit to the allure of another woman. This is an intense slow burner of a film that will shock viewers with how beautifully it portrays a very self-destructive side of love.
The film may take place in a single bedroom, but if there is one thing that one should take from Bitter Tears of Petra von Kant is that R.W Fassbinder and cinematographer Michael Ballhaus know how to make the most out of a set. The room is already glamorous, featuring a grand king sized bed, a small fashion studio area filled with mannequins that is separated by exposed beams, and a mural of Nicholas Poussin’s Midas and Bacchus that covers an entire wall. The film could have been a simply glorified stage show but the brilliance comes how camera and prop are positioned to create something purely cinematic in scope.  Each shot is immaculately choreographed in order to create an emotionally complex aesthetic; the exposed beams become frames within the frame, the mannequins and mural become metaphors for other women and desire respectively. One could forget to read the subtitles onscreen and still comprehend the stakes at hand just from the way the camera glides through the film.
There is a theme of sadism and masochism throughout that is disquieting and fascinating in how it is intimately portrayed. Petra von Kant is a prideful and domineering character that always gets what she wants; namely, from her mute assistant Marlene of whom Petra takes relish in verbally humiliating. However, the film subtly reveals that Marlene is her own agent, taking this abuse for her own desire, which colors the film in unusually sensual ways.  In the first act Petra is talking to her cousin Sidonie about her cruel ex-husband, both are in the foreground, but Marlene is in the background, starring at Petra. Marlene is initially out of focus until the camera slowly zooms in on her face, revealing that she is in tears, the camera then suddenly loses focus again and pans to a close up of Petra. This reveals a parallel between Petra’s marriages and her relationship with Marlene but the emotional context is so ambiguous. Marlene could just as easily be weeping for Petra’s past injuries as could be weeping for her own; either way, her presence haunts the entire film.  This is a moment of impeccable filmmaking, grandiose in its design and it maintains a delicate sensitivity that is so rare in melodramas.
The Bitter Tears of Petra von Kant is a difficult film to watch as its incredibly slow pace weighs down the drama created onscreen. Even the entire cast moves in a tired and meandering pace, as if Petra and her company were suffering from hangovers, but it ultimately fits the film. Often traditional dramas and Hollywood films maintain a fast and precise pace that comfortably pushes action yet barely lets the drama breathe. The benefit of the film’s slow pace of is that it allows for the audience to distance themselves and contemplate on the actions onscreen. The film could have felt perversely voyeuristic but Fassbinder tests this notion to uncomfortable extremes. The breakup scene of Petra and Karin exemplifies this because it forces the viewer to watch Petra slowly devolve into despair without any hint of relief. The room becomes claustrophobic and the heat from the red Poussin mural becomes palpable. By letting the drama unfold and remain unedited, the tension between these to character just builds to the point where it is simply distressing to watch.
The Bitter Tears of Petra von Kant is an emotionally complex drama that will strike a nerve with its beautifully displayed acts of love and torment at its most naked. The cinematography alone is on another level as it evolves a single room into an intricate display of the Petra’s state of mind, F.W Murnau would be proud. The pacing is not for everyone but those with the patience for it will be treated to one of most intense and beautiful dramas of the 1970s.  Like her bedroom, the story Petra is a luxurious, passionate, and at times unbearably intimate affair, which haunts the audience long after they have seen it. 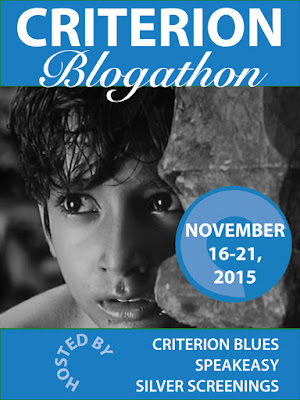 This post is part of the Criterion Blogathon, which is a weeklong blogging event that celebrates the films circulated by the art house distribution company The Criterion Collection.  For the rest of this week there will a plethora blogs—hosted by the websites Criterion Blues, Silver Screenings, and Speakeasy—that are reviewing everything ranging from the gleeful silent comedies of Lloyd and Chaplin to Akira Kurosawa’s brilliant samurai epics to the wonderfully weird films of countless auteurs like R.W Fassbinder and David Lynch. Nothing on Hausu, funnily enough, one would think that a film that crazy would be an early pick. Anyway, so check it all out, there are so many great blogs and films being posted that no reader will leave empty handed.

If you are have a Twitter account you can find all the latest posts via #criterionblogathon.
Posted by lonely critic at 8:27 AM