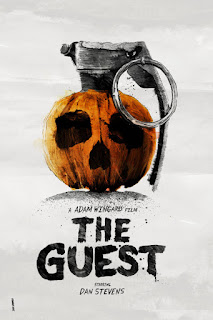 Ever since Cabin in The Woods* (2012) flipped the script on mainstream horror there has been an influx of indie horror films that bring a “back to basics” approach to the genre. Take for example Adam Wingard and Simon Barrett’s You’re Next, a 2011 slasher film that while not completely original, had some good Wes Craven-style twists that made it refreshing.  You’re Next was fine, but it looks like a warm up exercise for the The Guest, which could be a new Halloween classic. Made in 2014, The Guest is a delightful mix of 70’s and 80’s horror distilled into an intensely focused thriller that stars one of the most charming horror villains of the decade.
The Guest begins on a slightly somber note as the Peterson family grieves for their eldest son Caleb, a soldier who died in Afghanistan. But on the eve of the Halloween festivities, the family gets a sudden visit by David Collins, a tall, witty, chiseled man who was in Caleb’s old squad. Caleb’s brother and sister notice that something is terribly off about David but the parents enjoy his company. Honestly, after watching The Guest, who can blame them? David is an awesome dude. Sure he can cave in a man’s head with his fists but he has the wit and charm of a dapper Southern gentleman but with an actual sense of modernity. This is due to the fantastic performance of Dan Stevens, who looks just unstoppable with a grin or a glare. David is a rare character whose most human traits are more haunting than any boogeyman.
The Guest evokes the spooky intensity of Halloween and The Terminator, yet the film is sharp as a knife. The film has a morbid sense of humor; even as the bodies begin to drop, it is more than willing to slip in a one-liner or a kitschy shot to hysterical effect. The fact that The Guest is set in a town that worships Halloween gives the film a carnival atmosphere that makes it so fun and cool. Granted, at times the film feels too much like a lost film by John Carpenter—especially with the film’s aggressive electro-pop score, which emulates Carpenter’s musical style. Then again with a film this enamored with Halloween, who would not find inspiration by a filmmaker so ingrained to that holiday? The Guest may feel like an old car rebuilt from scratch but it least Wingard and Barrett made sure it was built to last. Guaranteed to make the seasonal watch list of any horror fan and neophyte.

(Available on Netflix, Amazon and DVD/Blu-ray)

* It just occurred to me that I muddled the timeline. Cabin in The Woods began production in 2009 and premiered in 2012; meanwhile, You're Next was filmed in 2011 and got a wide-release in 2013. I point this out because my review implies that You're Next was inspired by Cabin in The Woods when really they are kindred spirits of the same new wave of horror. Sorry for the confusion.
Posted by lonely critic at 7:25 PM