Sherlock, Jr. (or How to Tinker With The Frames) 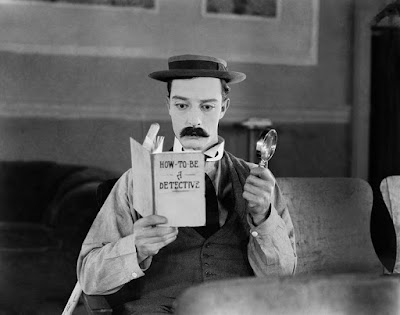 When examining the aesthetics of film it is easy to overlook the ones created in the years of silent film, especially films by comedians Buster Keaton.  He is a director that is more famous for his physical comedy than his camera work, but he had a natural talent for framing scenes and characters.  In fact, Buster Keaton’s comedy would have not worked if not for his ability to precisely fill the frame in order to create a surreal and exciting experience.
One of his most imaginative films was Sherlock Jr., which stars Buster Keaton as a nameless film projectionist who dreams of being a detective.  Made in 1924 Sherlock, Jr. shows Keaton composing his shots with grid structures, similar to the rule of thirds, to allow for clear and dynamic action within a small frame.  He even goes beyond the rule of thirds by composing himself and his actors in frames within frames in order to create effective moments of levity and surrealism.  By modern standards the use of space in Sherlock Jr. seems simplistic yet the framing techniques Keaton uses reveals how much freedom and director can have when manipulating the frame.
When one watches Sherlock Jr. it is easy to forget how small the frame is throughout the film. With an aspect ratio of about 1.33 the frame looks like a petit square compared to the massive widescreen blockbusters like Interstellar.  Nevertheless, Keaton makes full use of this small frame by dividing it into sections and using movement to keep the frame open.  An example of this is a scene in Sherlock, Jr. where the Projectionist is trying to escape a moving train by running on top of it to catch a rope of a water tower only to get pushed to the ground by gallons of water.  The scene is shot in limited space with the train and the Projectionist in the mid-ground and the water tower in the background; the train itself fills more than two-thirds of the frame.  As the train exits left of the screen Keaton runs against the train in order to stay in the top-center of the frame. Once the train is gone, the frame loses its stationary lines and Keaton loses a platform to stand.  This scene is relevant in that it shows Keaton framing a scene economically by allowing his characters and props to move in ways that would effectively change the surface and openness of frame. By having the train exit the frame, the scene loses the visual lines that the train creates and reveals a sudden gag and vast area for Keaton to exit.  It shows how dramatically the space of frame in a single shot can change by simply allowing movement to occur.
The line between the closed and open frame is blurred even further in Sherlock, Jr. with the famous the dream sequence. After losing his girlfriend to a crooked suitor, the Projectionist retreats to his projection booth and falls asleep while a murder-mystery film plays onscreen. He then dreams that the film’s villain and love interest are his rival and his girlfriend so he jumps into the world of the theater screen. Unfortunately, he cannot find his footing because the film keeps jump cutting to different settings.  This scene takes place in a frame within a frame.  While the frame is closed and the camera is perfectly still, the scene is absolutely chaotic due to the use of jump cuts that keep Keaton’s character in a state of tumbling confusion. As stated by William Verrone, “The visualization of the absurd—really, the impossible—in the sequence highlights the way surrealism works within comedy” (712) this also shows that the possibilities of manipulating the frame are boundless.  It is shocking to see Keaton suddenly stumble off a bench, then get cornered by lions, then stuck in a pit in the desert in what is meant to be a single closed framed shot.  Even when his frames seem closed he still finds a way to somehow drastically open up the environment.
The idea of a frame within the frame appears throughout Sherlock, Jr. as a form of character motif.  There are moments where Keaton’s character is in his projection booth and as he looks out the projector window the camera cuts to Keaton facing the audience with the window framing his body.  This shot is flat and in a closed frame, the window only takes up a small portion in the center of the camera frame, which makes the Projectionist look frail and sad. In contrast, when the Projectionist is introduced as Sherlock, Jr. an open door provides a full portrait of a hero with swagger.  The film eventually concludes with the Projectionist waking up and making amends with his girlfriend by emulating Sherlock, Jr. himself.  By comparing the two portraits of the protagonist the film reveals his yearning to become someone better than who he actually is and thus a sense of growth. This reveals how framing within the frame can be used to find emotional resonance in a film.
Through Sherlock, Jr. Buster Keaton uses simple tricks for manipulating space in films that are still vital to this day.  He did not worry about the size of the aspect ratio of the frame proper use of gridding and an open frame can still make shots feel large and exciting regardless.  When making scenes with action he tried to change the surface division of the frame by moving the props, actors or using jump cuts instead of moving the camera. When necessary he ignored any sense of cinematic logic in order to create a gag.  Finally, he could find the emotional core of a character by framing them.  These techniques reveal Keaton to be a filmmaker who tinkered with his films in order to make them to his liking, which is a perfect mindset for an artist to emulate.