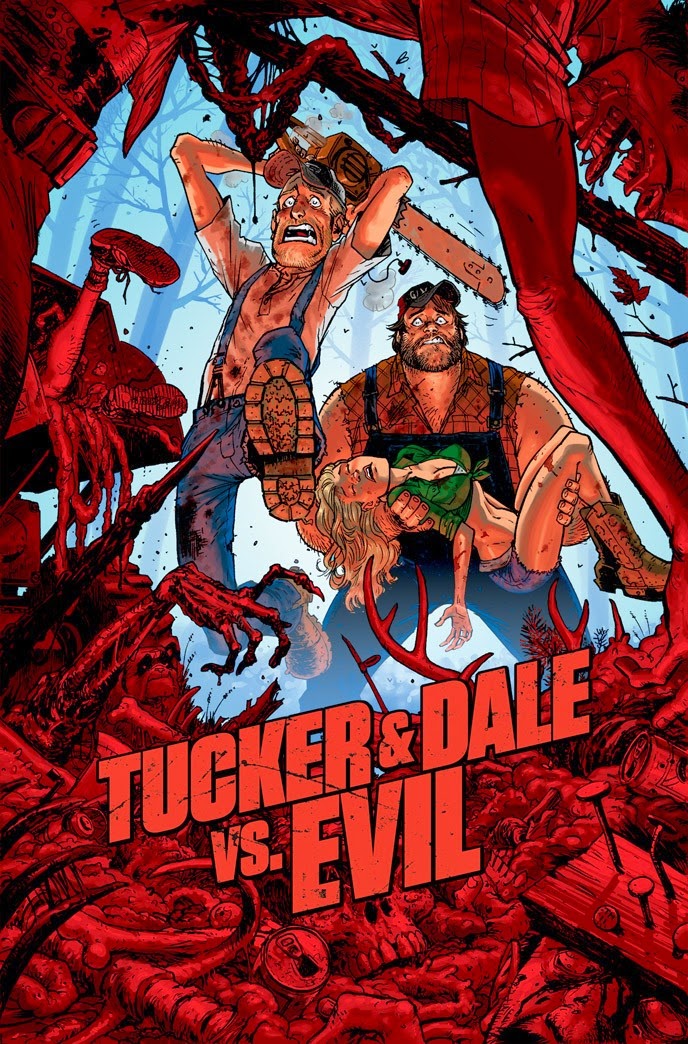 When I first saw Tucker & Dale vs. Evil my first thought was, “who wrote a film about me, and who the hell is Dale?!” Vanity aside, this film was actually a pleasant surprise. Tucker & Dale vs. Evil is a Canadian horror comedy about a pair of fierce looking yet happy-go-lucky hillbillies, named Tucker and Dale, as they work on their vacation home in the woods. Unfortunately, they look so scary that the dynamic duo unwittingly scare a group of college kids into a violent frenzy. Tucker & Dale vs. Evil is a riotously funny horror parody that not only flips the script on slasher films but also feels like a classic madcap comedy.
Blood and humor often do not mix well but it works in Tucker & Dale vs. Evil because the filmmakers are less concerned about realism than they are about mocking horror film clichés. Take Tucker and Dale for example, both look like they came out of Deliverance yet not only could they “not hurt a fish,” they probably have never seen a movie in their life. Meanwhile, these college kids probably have seen so many horror films that not only are they paranoid but they also deluded themselves into thinking at they are the warriors. Much of the humor comes watching Tucker and Dale act oblivious or scared while these kids fail fantastically to fight of the “scary hillbillies.” It is like if Abbott and Costello walked into the Texas Chainsaw Massacre, but all the kids think those two are the cannibals. It is bizarre and amazing.
If there is a complaint to have about this film is that the meaning behind the story is a bit muddled.  There is this running theme about how not every redneck is a madman but there is small and needless twist by the end that weakens the message. Thankfully, the performances throughout the film are as believable as they are hilarious.  The highlights are definitely Alan Tudyk and Tyler Labine as Tucker and Dale (respectively) both of whom bring a goofy charm to the film that is more sincere than most mainstream comedies of the past and present. Katrina Bowden also provides a good performance and her chemistry with the leads greatly boosts the breezy atmosphere of the film.
Tucker & Dale vs. Evil is simply a fun film to watch, it is like a direct-to-DVD film made by a cast and crew that actually gave a damn.  Whatever the screenplay lacks in finesse, the film makes up for in humor, energy, and charm. The titular characters call back to the great fools of yore while not feeling as anachronistic as them.  It is also clever in a way that only someone with a great understanding of the horror can create; it is surprising that a film this accessible can stay fresh through repeat viewings.  With the right crowd this could easily be a Halloween party staple.


(Tucker & Dale vs. Evil is available on DVD,Blu-ray, Amazon Prime Instant Video and Netflix)
Posted by lonely critic at 5:53 PM