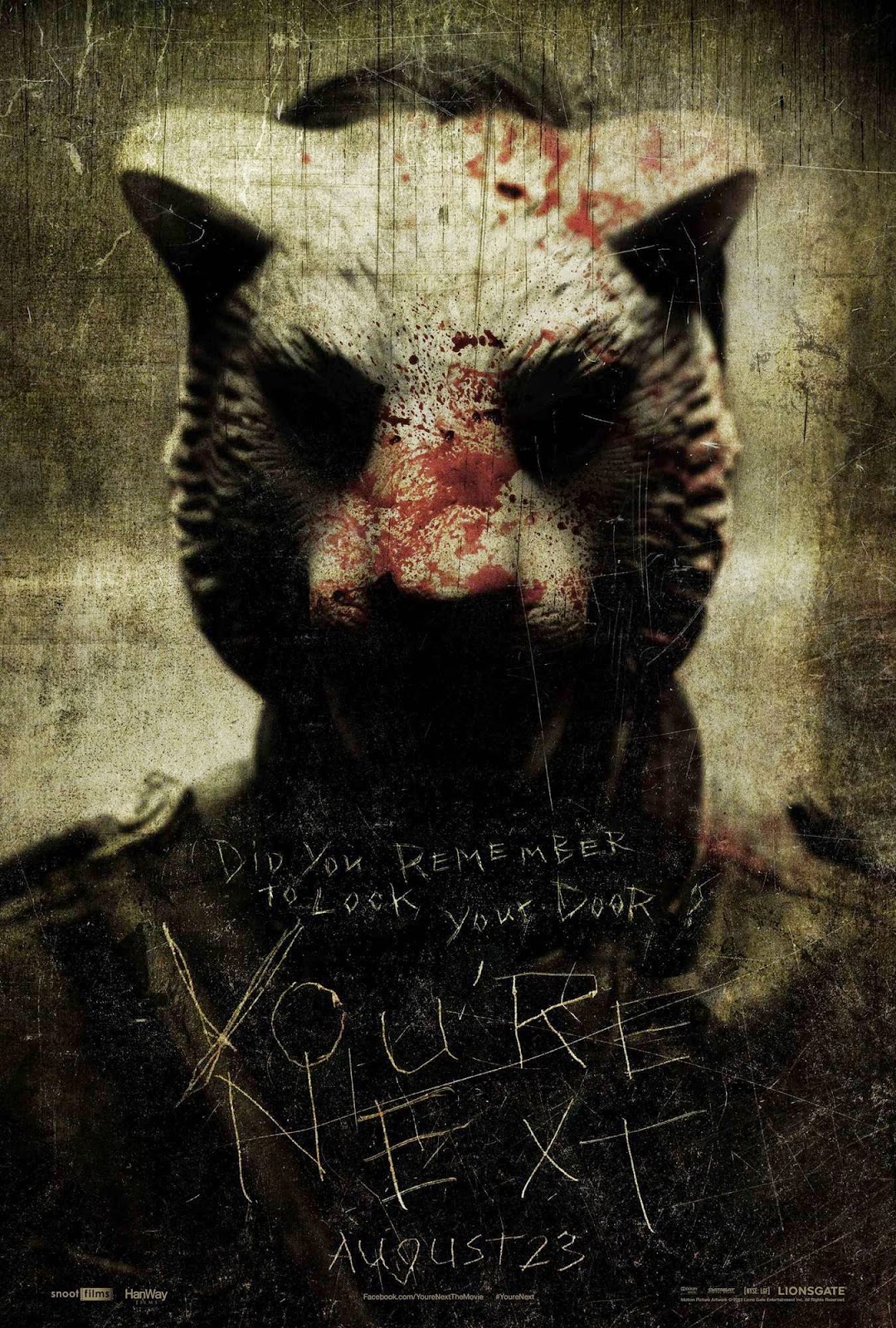 You’re Next is a slasher film that was really popular in festivals like Toronto Film Festival and Fantastic Fest last year; it was not a hit at the box office but is still popular on streaming sites.  It is touted for being a subversive horror film, like Cabin in Woods and Scream, something that turned the horror genre on its head. Having now seen the film myself, it is a fun but underwhelming film.  You’re Next is an undeniably clever film filled with strong twists and a badass lead character but it lacks a real sense of interest it’s own plot. Even with a strong protagonist the film’s dull script diminishes it to a decent horror rental, at best.
First of all, Sharni Vinson is genuinely wonderful and badass as Erin, the lead character in You’re Next.  The arc of Erin is the foundation of the most fun ideas this film has to offer and Vinson’s nuanced, layered, and funny performance keeps the film grounded. If there is a reason as to why this film is still worth watching, it is to simply watch Erin kick ass. It is shame that the rest of the cast and their characters are not as interesting as what Vinson is doing in this film.
The cast is not awful; they are just not given much to do beyond killing and dying. Aside from Erin, they either lack presence, backstory, or they are simply unlikable; by the time the slashing begins, their personalities blur into another mob of horror victims.  Yes it seems counterintuitive to say, “people just die pointlessly in horror films” but these characters are more flat than one would expect. Plus, You’re Next is not trying to be just a slasher film but a subversive and comic horror film.  At the halfway point, the film decidedly takes clichés of horror films like “the final girl” and “the unstoppable killer” and spins them into a realistic subtext. The filmmakers clearly know that this genre is artificial and want to make this film look like a realistic incident. Why is it that only the main character acts like a person in house full of clichéd horror characters? That is anybody’s guess. The film overreaches its grasp but at least the subversive bits make for an entertaining second act.
You’re Next is not a bad film it is just shallower than expected.  Anyone yearning for the next great horror satire will be sorely disappointed; as just another slasher film, it is well executed.  It has a protagonist that is exponentially better than any character of the same ilk that is played by great newcomer, Sharni Vinson.  Even though the subversive elements are under-utilized they are welcoming in their cleverness. Overall, it is not as audacious as Cabin in the Woods, not as funny as Tucker & Dale Vs. Evil but at least it is not as obnoxious as Scream.


(You’re Next is available on Netflix, Amazon Prime, DVD and Blu-ray)
Posted by lonely critic at 7:31 PM