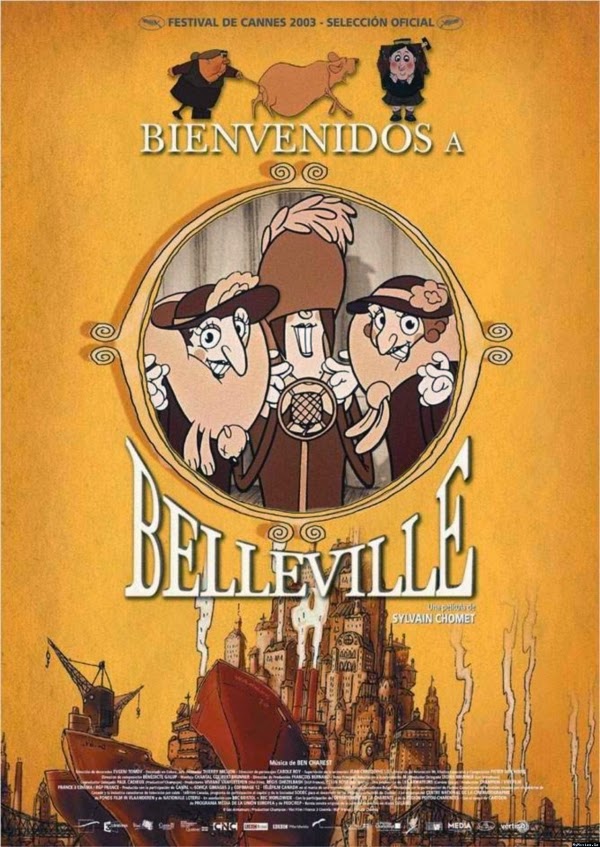 What a lovely oddity. Triplets of Belleville is one of those films that are both easy and hard to describe.  It easily the weirdest animated family film of all time; then again, that implies if kids are actually patient enough for it.  For one there are only about two decipherable lines of dialogue in this film, though it does not really need them. The story is like a Don Bluth film, which is about a kidnapped cyclist being saved by his heroic grandmother, their dog, and three jazz singers, yet the filmmakers prefer to linger on the moments between the plot beats than creating a tight narrative. The film is so surreal that it can feel baffling yet it is these style choices that makes this film it so poignant. Whereas some say “it is about the journey and not the destination” Triplets of Belleville goes even further by being about the people that support the journey.
It is a testament to the talent of the animators that they can be so surreal yet so expressive that little dialogue is needed to make a sensible and engaging story.  The film reveals how much a viewer can take visuals and sounds for granted by greatly emphasizing the former over the later.  While jarring initially, it is funny and inspiring to see the cyclist evolve suddenly from a round kid with a tricycle to this stringy man with watermelon crushing thighs.  The animation is also why the lingering bit work so well, seeing an old lady tune and play the refrigerator like a harp is cooler than any car chase because of how idiosyncratic, intricate and more importantly character defining these moments are the characters more fascinating than the journey itself, which is encapsulated by an ending that brings warm nostalgia for family and friends that have left or passed on.
Triplets of Belleville is a strangely brilliant film, not just because the odd animation is fun to watch but also because of its ability to incite a very personal nostalgia. Not the tacky nostalgia that like a 80s hair metal revival band concert but the kind that will make people want to call up their parents to say “thanks.” It is a painful but warm film that sticks to the head.


(Triplets of Belleville is available on Netflix and DVD)
Posted by lonely critic at 7:08 PM