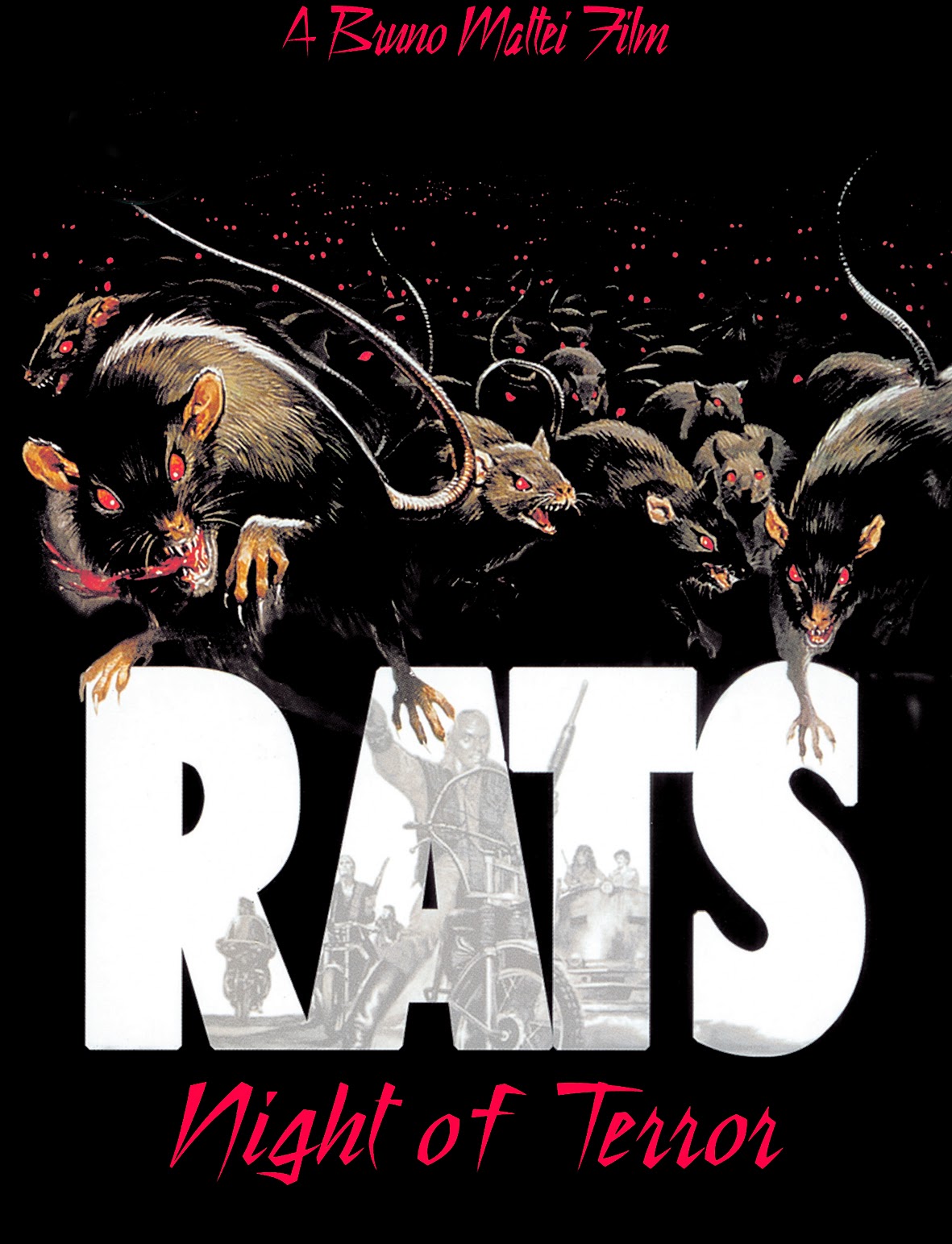 There are filmmakers who are studied and admired best of their ability to create great works of art; Bruno Mattei is not one of those kinds of filmmakers.  As the director trashy classics such as Strike Commando, SS Girls and Robowar, Bruno Mattei’s most watchable film is arguably Rats: Night of Terror.  The plot is simple enough, it is a post-apocalyptic horror film about a sci-fi biker gang that travels to a deserted city; and then suddenly, they are attacked by thousands of hyper-intelligent flesh eating rats! The plot is made of classic horror B-movie material but even then Bruno Mattei somehow makes it denser that should have been.
The biggest flaw of Rats: Night of Terror, which there are many, is the weak attempts by Bruno Mattei and his writers to improve the film with things like profundity.  The film has a bizarre scrolling text prologue that is about the divide between dirty surface dwellers and the rich underground people of this post apocalyptic landscape; this would be fine if the film went beyond being a Birds or Night of the Living Dead knock off, instead it is rather pointless.  A couple of characters ramble on about the religious and philosophical implications of their predicament.  Finally it ends with a twist that is so baffling it could fit perfectly in a Twilight Zone parody sketch on Futurama.  Bruno Mattei attempts to make this film “substantial” are admirable but it is mostly half-baked moralizing; then again, when more effort was put into making a rat tunneling realistically out of a woman’s mouth, one wonders what Sigmund Freud would have thought of this film.
With all that being said, the film has some merits, mostly unintentional merits but it effective nonetheless.  For one, the rats are genuinely creepy in this film with their beady red eyes and sneaky demeanor.  The film is surprisingly well paced which means is some actual tension at times.  Even though Rats: Night of Terror look fine for B-movie, its best qualities come from the fact it is just plain silly. The acting is filled with enough ham and cheese to make William Shatner jealous. Everyone looks like they going to a Billy Idol concert.  The English dub is loaded with bizarre phrases like “this machine needs a kick in the balls!” The film gives up on the “intelligent rat” idea in favor of just literally pouring rats onto the poor actors but it leads to some cool gory moments.
While Rats: Night of Terror is a great film to watch with friends who like to riff on bad movies; given that it is more competently made than films like The Room, it is surprisingly easy to watch.  There are plot moments that would kill pace of any film like this but there is enough B-movie hilarity and genuine thrills to keep the momentum moving.  It is a fun experience to watch and would be great as part of a double feature with Night of the Lepus or The Killer Shrews.

(Rats: Night of Terror is available on DVD, which is half-off on Amazon.com as of this writing)

Posted by lonely critic at 5:06 PM