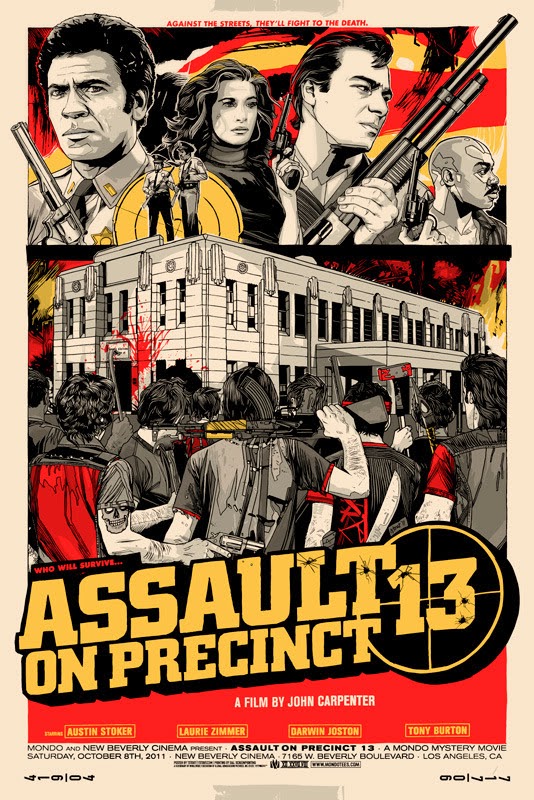 When reviewing exploitation films or B-movies, there is a gray that makes it difficult describing how genuinely good they are without appearing hyperbolic or sarcastic. This is partially due to the idea that the budget equates to the effort put into a film, which is a fallacy.  For example, Assault on Precinct 13 is a cheaply made B-movie that is as awesome as any films that Clint Eastwood was making at the time, even Dirty Harry. With only $100,000, little experience but complete creative control, director John Carpenter proved with Assault on Precinct 13 that anyone can create a great film in spite of such limitations.
The story is very much like every gang exploitation film; some poor sap kills the wrong guy, he gets chased into the 13th Precinct by a horde of thugs and its up to the rookie cop to protect him until reinforcements arrive, insert vague social commentary. The story is not much but the reason why this film is so great is Carpenter’s sense of structure and film tradition.  Carpenter is the horror director who famously made Halloween and The Thing, which are two films that are known for having a fantastical view on evil and for being as intense as a hot pressure cooker. This intensity started here in Assault on Precinct 13 as the plot meticulously builds up the characters and the moments leading to the titular event for nearly all of first half of the movie, which then explodes with fury.

The horror elements aside, Assault on Precinct 13 is really a throwback to the westerns of the 1950s like High Noon and Rio Bravo.  The black hats are now black leather vests and the white hats are now beige police uniforms. This should make for a simplistic mess but the cast is used well and they sell the hell out of the premise. Austin Stoker proves to be a powerful lead actor who could have easily replaced John Wayne if Method Acting was not in vogue at the time. The highlight though is Laurie Zimmer who plays the archetypical Hawksian woman but unlike most of them she not afraid to use a gun; this sounds cliché but for 1976 that was very surprising.
If there is any fault to this film it is that there are moments where the budget puts a strain on this movie.  Assault on Precinct 13 cost about $100,000 to make; for perspective, Sam Raimi made his infamously low budget horror film Evil Dead with $350,000, he literally could have made Assault on Precinct 13 3½ times.  There are moments where they obviously cut corners, particularly in one shootout montage where they seemingly reuse shots, which really slows the pace down.  On the upside, the fact that the majority of the film is confined to a single set is a brilliant trick to bring in claustrophobic tension. For all the gun-ho posturing these characters have, there is a genuine sense of doom before the climax even begins.  The film also has a sense of discipline compared to the campy alternatives like Evil Dead and Rats: Night of Terror. The film never overreaches nor quits, it simply focuses on creating some great action.
Assault on Precinct 13 is a film that should not be as good as it is yet it is undeniably sophisticated and badass.  John Carpenter, as raw as he was, knew his strengths and studied his inspirations in order to make some great old school thrills.  Laurie Zimmer and Austin Stoker prove to be wonderful actors who deserved better careers.  Not only is this film must-see, it proves that creativity is a more essential tool than a mountain of money.  Actually, given that the film industry would soon nearly crash due excessive spending on flops like Heaven’s Gate, one would wish that Hollywood provided budget limits earlier.

(Available on Blu-ray and DVD, I recommend the Shout! Factory Blu-ray since it looks the best and has some great extras featuring the surviving actors)
Posted by lonely critic at 1:49 PM