A Sample of The Master of Suspense (Minus Psycho)

Alfred Hitchcock is a British film director who, while already great during his time in his homeland, had truly made a name for himself as a Hollywood director. What Hitchcock has contributed to the thriller genre can easily be compared to what Pixar has done for Western animation (minus Cars 2).  Thanks to his imposing eye for detail, near perfect control of the story and pace he had brought a simple genre into new majestic heights; and he made sure it stayed there until he died, because that’s how he rolled! 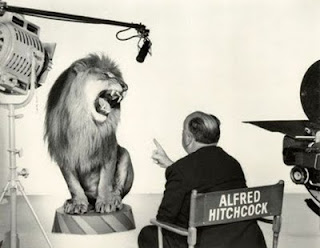 The lion wasn’t told to sit, he just knows better.
That being said, it seems like many youth only remember him for his film ‘Psycho’, or at least the shrieking violins. While there is nothing wrong with ‘Psycho’, a director with a filmography that is as great as it is large, as Hitchcock’s should not be defined by one film. It is like walking past a city a gold to find a diamond.  Anyway here is:
Hitchcock for Dummies: 5 Great Thrillers
Rope
Alfred Hitchcock, in spite of his status as a mainstream filmmaker, had a penchant for experimenting with his equipment.  Each film he made is created with a distinctive approach with ‘Rope’ being among his boldest.  Hitchcock originally wanted ‘Rope’ to be filmed in one take, but since that is too awesome to be possible, he settled with recording at ten-minute lengths.  In short, during the entire 80 minutes of ‘Rope’, there are about 10 camera shots.
The story of ‘Rope’, while not as elaborate as the cinematography, is no less unconventional.  Begins with two men strangling another man for no real reason except for the belief they were superior to their victim.  Adding insult to fatality, they put his body in a trunk and use it as buffet table for a party they scheduled before the story began.  Their guests suspect nothing, even when the hosts start acting edgy, with the exception of their former college professor (played by James Stewart).
Rear Window
In a Greenwich Village apartment complex lives photographer named L.B Jeffries (Stewart) who, after breaking his leg, can’t find anything better to do than spy on his neighbors. Then one day he notices that Mr. Thorwald’s wife has suddenly disappeared, did she leave him, was she kidnapped, Jeffries must know the answer.  Now it is up to him, his girlfriend and nurse to discover truth behind the disappearance of Mrs. Thorwald.
‘Rear Window’ is a great thematic study about curiosity and voyeurism.  Not only does the audience become intrigued by this hazy murder mystery, but with the other neighbors daily dramas. For ‘Rear Window’, Hitchcock literally created this little neighborhood where all of these very minor, yet engaging characters work through their daily routine.  The fact that every outdoor shot is from the view of L.B Jeffries’ apartment only encourages the viewer to become as nosy as the main character, forgetting that curiosity killed the cat.
The Birds
What happens when an A-list Hollywood director decides to create a cheap monster movie?  One thing the audience will notice is that ‘The Birds’ does not have a musical score. This actually improves the film as it relies on distinct sound effects and visual cues, rather than the traditional shrieking strings and brass, to emphasize its bleak atmosphere. The visual effects in ‘The Birds’ have aged like milk (even with the use of real birds) but the on going sense of dread is more than enough to cause even the heartiest viewers’ spines to shiver in terror.
While Alfred Hitchcock is admittedly a sadist but in ‘The Birds’ he is downright merciless as men, women and even kids fall victim to the wrath of a thousand crows and seagulls. Eyes are gouged out, cars explode, and this is made all the more frightening in that these birds have no motive for their actions.  The victims of Bogeda Bay wonder in trembling fear as to why the birds are attacking and so will the audience.
Notorious
‘Notorious’ is the sexiest movie of all time. ‘Notorious’ plays like a thinking man’s idea of a James Bond film.  Alicia Huberman (played by Ingrid Bergman) is a playgirl and daughter of a Nazi spy who, after his conviction, is recruited by an agent named T.R. Devlin (Cary Grant) because of her father’s connections. Before her assignment, both Devlin and she fall in love, which complicates her mission, as it requires her to seduce a Nazi leader.  This leads our lovely heroine into a romantic thrill ride dripping with innuendo, back stabbings and champagne.
Compared to the majority of Alfred Hitchcock’s work the acting is impeccable. Bergman plays her character brilliantly as someone is both strong willed, vulnerable, and icy. Claude Raines manages to do the impossible by making a Nazi, of all people, to be sympathetic. But the man of the hour is Cary Grant, who not only plays the tall, dark and handsome man he has parodied throughout the majority of his career (like in ‘Gunga Din’ and ‘His Girl Friday’), straight, he plays it with greater nuance than anyone before Notorious and until Sean Connery played James Bond.
North by Northwest
With Independence Day coming to an end, why not mention the film where Cary Grant climbs down George Washington’s face, it makes sense in context. Anyway, Cary Grant plays Roger O. Thornhill an advertising executive who is mistaken for a secret agent named Kaplan by some gangsters.  Curious as to whom Kaplan is, and not wanting to get killed, Thornhill travels across state lines to find this secret agent.  What he finds instead is a crop-duster, the radiant Eva Marie Saint and a @#$%load of twists.
‘North by Northwest‘ at first glance is a paint-by-numbers Hitchcock film. The film is about a man on the run the love interest is a platinum blonde, lots of innuendo, and cops; by all technical standards ‘North by Northwest’ should be called unoriginal. Yet it this excessive amount of tropes and how well they are written into the story that makes ‘North by Northwest’ so great. Alfred Hitchcock and Ernest Lehman, the screenplay writer, clearly had a blast creating this highly stylized thriller.  The dialogue is sharp as a tack and the characters not afraid to snarky in the face of danger.
Posted by lonely critic at 9:40 PM