Halloween Special (keep reading or the psycho behind you will stab you.)

Horror films are probably the easiest or most difficult criticize, most likely because it is often difficult to take them seriously. Everyone with “standards” will argue that each horror film has the same premise. There is an evil entity that wants to kill everybody and there is a group of idiots that get snuffed off because they don’t know how to call the police. Of course the psycho and I don’t have any “standards” so here is our list of films to watch on Halloween. These are not necessarily the best horror films of all time but the most fun. They are spooky, fast, and they don’t %#$@ around with stupid stuff like social commentary. All they require from you is popcorn, pizza, a twelve pack of soda and (if you’re a jerk) the candy that you decided not to give to the kids.

6 “Must See” Flicks for Halloween


The premise of the Evil Dead series is fairly simple. Bunch of idiots go hang out in a cabin, one them finds a book full of evil, they read it and evil shit happens. But the films are so outrageous that the plot just slips away into pit of gore and silly makeup. The films tone was not like any other horror film at that time. Back then filmmakers had conformed to the style sixties-seventies B-movie horror, which were all serious and dark in tone. Sam Raimi, the director, preferred the old Universal horror movies like Frankenstein and Dracula; he also liked cartoonish comedies of Abbot and Costello. Raimi’s personal tastes are shown throughout this carnival show of series with a shit ton of goofy monsters, some ridiculous death, and absurd catchphrases told by the man with the world’s biggest chin. Evil Dead and Evil Dead 2 are like those spook houses at the county fair, there plenty of scares but hilarious in hindsight. 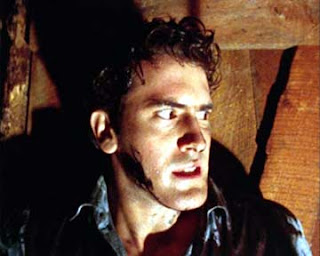 But seriously look at that chin
5. Halloween (1979 version)
Oh shut up, it was inevitable that Halloween would show up on the list. Sure it started the trend of the slut massacre and it was clearly shot in the spring instead of the fall, but it’s still awesome. For one Michael Myers is (in my book) the best slasher villain of all time. Myers is like a psychotic ninja; he is silent and clean about his murders, not like Jason or Freddy Krueger who just make an unnecessary mess and be annoying. But what makes these deaths so horrifying is that every character is relatable instead of likable. Protagonists often are given “a past” to gain sympathy votes from the audience, that does not work in horror flicks. The character has to be bounded to the routines of reality. For example, Laurie Strode is just an ordinary girl who’s only secret is a crush for some guy. A sense of familiarity puts the audience in the shoes of the characters, which makes the experience more personal. That could be YOU getting stabbed; Michael Myers could be REAL and he maybe in your front yard right NOW. But it could be worse…
4. Alien
Here is a great way to get fired, pitch the story of a towing ship, in outer space, that discovers an alien that greets people by raping their faces. It dies but then another phallic looking alien pops out of John Hurt and tries to kill everyone. Oh and the alien is covered in KY Jelly (seriously that’s what the slime is). In all seriousness Alien has one of best taglines of all time: “In space no one can hear you scream.” Not only does it sound glorious it points out what makes Alien so great. Our victims are stuck on spaceship where the only help is gazillion light-years away, they are not trained soldiers and the only weapons they have would probably do more damage to the ship than the monster. The crew is quite literally at the mercy of the alien and it’s appetite. Now that’s #$%@ing scary.
3. The Thing
There is a scene in Halloween where a little kid is watching a movie Thing From Another World”. Apparently John Carpenter really liked this filmed because he decided to do a remake that cranks the crazy up to eleven. The film is basically Alien set in Antarctica but it stands out because of two things. 1) It has Kurt Russell who is so awesome that his name is the last thing Walt Disney ever wrote. 2) The monster is *&^%ing terrifying. The monster is basically the Shoggoth meets the aliens from Invasion of the Body Snatchers. It is twisted goo that can create tentacles, slip into the cracks and suck the life out of the living. Even freakier is that the monster can impersonate somebody that it has killed, which makes the survivors a little uneasy. Actually they get more paranoid than a pot-smoking McCarthy, but that is what makes The Thing so awesome. The only flaw it has is that this theme of paranoia and weird monsters just reminds me that this is the closest thing to a H.P Lovecraft film that Hollywood can produce. Apparently they’re afraid that Cthulhu will give them to much money. 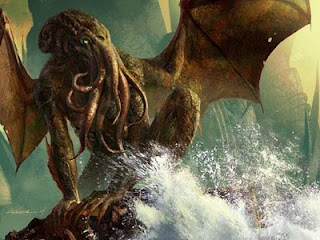 One can dream...
2. Night of the Living Dead
Ah yes the great zombie apocalypse, the end of the world scenario that just keeps on giving. Whether they ran or limped to their prey, or if they are in a mall or Jamaica, there are always good times to be had with zombies. While zombies have been shown on film before (White Zombie, I Walked With a Zombie) they never were the iconic lurching, man-eating freaks until Night of the Living Dead was created. But underneath all of the zombies and carnage is, shockingly enough, a story. A bunch of scared people trapped in a cabin that’s surrounded by the undead. There is a jeep outside the cabin but it needs to be refueled and help is implied to be on the way. Should they escape and risk getting surrounded or wait for help that might never come. That is it, no bimbos, old badasses or mad scientists in this film. It’s just a group of scared people trying to work together in order to survive. Good times.
1. Plan 9 From Outer Space
It is only the greatest film of all time. This sci/fi horror epic has… I can’t even be sarcastic about this movie. Plan 9 is awful in so many ways; to nitpick on everything is like counting to infinity, but I’ll try. First, if your alien race fails to invade a planet more than 8 times then it’s time to think about peacekeeping tactics. The director Ed Wood was infamous for never filming a second take, so when someone knocks down a tombstone or makes a stupid face, it’s in the picture. Bela Lugosi (famous as the original Dracula) was advertised the star of Plan 9, unfortunately he died before production so they use a body double who had to cover his face with a cape, they also keep using the same 2 minutes of stock footage of Bela spinning around in a field like it was going to waste. The script can be summed up with this actual line from Plan 9: “I saw a flying saucer… it was shaped like a huge cigar.” For context, they don’t look like %^&#ing cigars. 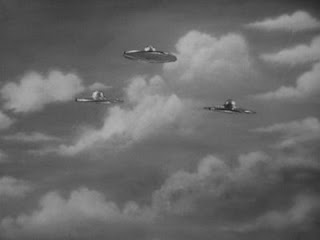 Cataracts are a b*tch ain't they?
Of course Plan 9 From Outer Space is not exactly an Oscar winner or scary that is not why it’s on the list. Plan 9 is on the list because it is a hilarious train wreck that even the kids can enjoy. A common practice is to drink every time an on-stage goof happens, but I don’t recommend because the game would be over 30 minutes. Better yet, just watch Plan 9 with a bunch of friends and you shall feel the awesome power that is sarcasm. Exploit this power and you shall feel enlightened.
Honorable Mention
Rocky Horror Picture Show is the infamous schlock/sex musical comedy that has confused the minds of many children with songs like “Sweet Transvestite” “Dammit Janet” and the ever-catchy “Time Warp”. While this movie may be fabulous enough to hold the record for longest running theatrical release record; three rules have to be followed in order to get an enjoyable experience.
Rule 1: Only watch this in a movie theater (it is often shown at midnight at most independent or art house theaters.
Rule 2: Be prepared to question your sexuality.
Rule 3: Bring a newspaper or umbrella.
Well that’s the list. Feel free to comment on anything you love or hate about article. Better yet tell me what is your favorite Halloween movie. It can help improve my library, plus Devin “Katosepe” Sloane will not be as lonely.
Posted by lonely critic at 7:20 PM